Xiaomi purchases additional NI NFC Test Equipment. As a result,  it strengthen the test capacity of their R&D laboratory and drive customer satisfaction.

Xiaomi, a leading smartphone designer, have increased their test capacity in July 2019 for the NFC technology. They add another NI NFC Contactless Test Station in their R&D center located in Beijing, China. In 2013, Xiaomi purchased first NFC test equipment from Micropross (Micropross is fully owned by NI as of 2015) for EMVCo and NFC Forum testing.

Xiaomi have its mobile payment system named Mi-Pay. It is based on the NFC technology. It enables its users to access value added applications.  Contactless payment of course, but also public transportation. Mi-Pay was launched in China in 2016. Its success was such that it enters now a phase of international expansion, on markets such as India. Also, as per the mobile market is very dynamic, so Xiaomi have to add another unit of NFC test tool. This addition is to make sure of the development cycle and products quality. 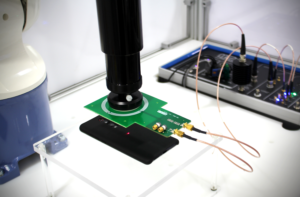 Strengthen the NFC testing capability became necessary. The high utilization rate of the first deployed NI system, and the will not to make any compromise on quality, motivated that choice. Supplied with a manipulation robot, the test tool is automated and easy to use. Even non-specialists can confirm that. Testers are able to run measurement batches without human intervention. Therefore, they can spend their time on other tasks while the machine is running.

During the tool selection phase, Xiaomi surveyed their environment. In other words, they interviewed partners, suppliers (NFC controllers, antennas), EMVCo and NFC Forum certification test laboratories. They came to the conclusion that this tool is the standard in the industry. Those two factors let Xiaomi to continue to co-work with NI.

Furthermore, NI’s Shanghai service center has been enabled to support a significant portion of the NFC and Wireless Charging range of testers. China based customers such as Xiaomi will be able to benefit from this service.  They will enjoy a system calibrated on a regular basis while saving time and effort on paperwork and logistics.